After being criticised for her writings, journalist and author, Ece Temelkuran hits back with her latest feminist novel, The Women Who Blow On Knots.

Outspoken Turkish reporter, Ece Temelkuran is known for her controversial opinions, which have often threatened her safety and ultimately culminated in losing her job from The Haberturk Daily in 2012 after openly criticising the Turkish government However, this didn’t deter Temelkuran and out of adversity, has come her latest novel, The Women Who Blow On Knots – which follows four strong, independent women travelling from Tunisia to Lebanon during the Arab Spring.

The narrative begins as three Muslim women meet in Tunisia – Egyptian Maryam, Tunisian Amira and a Turkish journalist (similar to Temelkuran herself)– who, although they meet by chance, seem almost drawn to each other and form a fast friendship. Before they know it, they find themselves on an unexplained journey across the Middle East led by septuagenarian, Madam Lilla – a mysterious yet compelling woman who takes an unusual interest in the three women. Each one of them is running from a secret pasts, which slowly unravel throughout their journey.

As they travel from Tunisia to Lebanon, Temelkuran successfully humanises the politics of the Arab Spring when many had become desensitised to the daily media coverage of the various protests. Along their journey, the women are met with a number of people who have close connections to the Arab Spring or the effects of it, bringing it to a more personalised level and allowing the reader to reflect on the individual people who were affected.

The novel, which has now been translated worldwide, is another piece of Temelkuran’s writing, which some have considered controversial. Speaking in an interview at a recent Books Without Borders Bookclub event on the novel, Temelkuran explained, “When I named this book, everybody was so furious, especially my publisher in Turkey. Everybody pushed me to change the title to something like ‘The Journey of Witches’ or something that would be a more sexy title in term of sales.”

However, an undeterred Temelkuran insisted on the title, derived from the Quran (which she studied for a year) and explained to us why and where it came from: 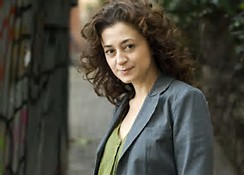 “There’s an expression in one of the verses which says ‘Beware of those women who blow on knots.’ – those women who do witchcraft by praying and tying knots then would blow on these knots to seal the prayer. So I thought if the holy book of Islam believes in the strength of breath of women there must be something magical in it. And this was a very hard year for me, I was in Tunis, I was alone and meanwhile I was fired from my job. So the only thing I could believe in was the strength of my own breath.”

Madam Lilla is a true delight in representing this strength in women as Temelkuran tells us about the inspiration behind her character,

“She’s a combination of many women I met through my years of journalism because I met some amazing women – extremely strong and resilient women. She’s a mother that I constructed for myself and even now, when I have hard times I go back to Madam Lilla in my head and speak to her. Thank God I created this character so there’s someone in my head to talk to – someone who properly answers my questions!”

The story consists of a multitude of layers, which cover a range of themes and crosses both literal and metaphorical borders that can be interpreted in many different ways. But is there an overall message that Temelkuran aimed to communicate through the novel? “I wanted to create a message about motherhood and how we adopt new mothers during our lives,” Temelkuran explains,

“At the end of the book, there’s a sentence where it says something like ‘we don’t even need a God to love us if we had a courageous mother.’ The ultimate message is that.”

Temelkuran’s brave decision to fuse politics with the power of women, despite her reputation being at great risk, is one to be admired and this defiance can be felt throughout the novel. Describing the struggle she often faces, Temelkuran tells us, “Trying to protect yourself as a writing woman, feels like you’re having a sword fight with the ghosts when it comes to such attacks. It’s not easy but I think we’re going to find a way through solidarity and creating awareness about the situation.”

And The Women Who Blow On Knots embodies such solidarity with a powerful message of not only the strength of women but how to use this strength. It’s a novel that can inspire people from across the world to defiantly challenge injustices and unequal societies just as Maryam, Amira, the Turkish journalist & Madam Lilla did.

Women Who Blow On Knots – Published by Parthian Books

Blogger Tasha Mathur is also a member of Books Without Borders Bookclub.