Every once in while we have seminal moments in the arts and at times we return to seemingly well trodden roads and in particular the subject of stereotypes or in this case Asian stereotypes in literature, do they exist?

Are there more or less then before? It was the subject up for energetic debate at the recent event held at Asia House in London.

The debate provided a looking glass on the whole subject of Asian stereotypes in literature and gifted a moment of much needed reflection on the issue as the end of 2014 hurtles towards us.

There was the ever clear and present danger of the event possibly rankling a few observers through heated debate and if you were of the persuasion that things were just fine and dandy then you were likely to have your quiet non-plussed persuasion punctured.This was not going to be BBC light entertainment fodder for Saturday night television by any standards. One was almost expecting effigy burning of every publisher who said no, every publisher who said maybe and every publisher who said could be. Forgive me though for a moment of jocularity. I thought it might make for a good diversionary tactic from being overly serious or being hangdog. However the inescapable fact is that even in a multicultural, multi-media liberal leaning 2014 Britain, we still need to debate and interrogate the whole idea of stereotypes in the arts and in particular in literature.Presenter Biddsha asked presenter Yasmin Khan just what stereotypes were expected of her during her professional life. She recalls a production meeting and recounts what one programme commissioner apparently said to her during a meeting. The commissioner apparently told her “Its great that that you bring us stories but don’t feel that you cant bring other stuff, stories about your community..” and right there was the first seemingly outmoded word “community”. The idea of Asians being part of an all-embracing, homogenous community is undoubtedly an urban myth. The impression of Asians being representative of communities has always been around. How are Asians though by the very nature of the fact that we are Asian, somehow representative of all communities? Does that make us qualified to talk on ethnic matters ? possibly; to be somehow flag bearers for all things Asian or even standard- bearers possibly not, since the ethnic make-up of areas up and down the country are affected by a multitude of influences including political, social, cultural; socio-economic or otherwise.

So from a literature standpoint, its not difficult to be riled slightly, even for the more phlegmatic ones amongst us. Author on the panel 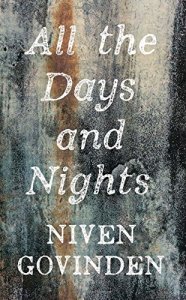 Bidisha underscored the point of how there are certainly very familiar narratives in Asian fiction; the forced arranged marriage being the most popular one et al and possibly making the cosily more common stories more “publishable” then others. Govinden commented “If you are far more singular about your work then you don’t have to work in that way.” You might ask the genesis of stereotypes in literature normally is with the very publishers themselves, leading one to think that there are not enough ethnic minorities within the publishing industry. Niven revealed how the trade publication The Bookseller did a follow-up to a study done a decade ago, highlighting the problem of a lack of ethnic minorities in the publishing industry and guess what? Things have not changed a decade later. Just what are the concrete things that need to be done asked presenter Bidisha. According to Niven “It begins at university and encouraging more people who are about to graduate to join the industry.”

Frankly if that didn’t get your jowls jarring, then there is the slightly noxious combination of literary fiction and seemingly colonial or genre based Asian stereotypes. Whilst it could be vigorously argued that the South Asian fiction panorama is very much alive and kicking with Jhumpa Lahiri`s The Lowlands.

and Neel Mukherjee`s The Lives of Others

shortlisted for 2013 and 2014 Booker Prize respectively. According to Niven however, there is an inherent risk of writers simply comforming to a set of literary rules or a genre, just to make their book publishable.”The danger is that you don`t nurture the development of writers who work outside the tradition. Its not challenging work. Its an easy sell. If you spend the kind of attention on writing different kinds of work, you have a far more interesting landscape.”


My fear is that in satisfying the commercial whims of certain publishers who like theatre producers need to get bums on seats,like film makers need to shift cinema tickets; writers might be implicitly expected to produce stories that use cosily familiar stereotypical images that lets face it sell. Historical, political stories with high drama and tension- fuelled communal relations might be exquisitely written and deemed Booker prize worthy, but it might be argued are they really examples of fresh, challenging fiction?

Perhaps that`s a debate for another time. Yet its not all literary doom and gloom. Hope does spring eternal. There are books that are challenging that romanticised, chocolate box image of South Asian writing with redefining work that delivers a big fat Glasgow kiss so the charming expression goes, to all stereotyped or genre based fiction. Deepa Kapoor`s Bad Character was in my mind, a game-changer of a novel with its story turning the image of the young stay-at- home Asian woman on its head and presents an uncompromising image of the under-belly of Delhi.

We now need a new generation of authors to rewrite the rules on South Asian literature with exciting and enduring stories that give stereotypes a wide berth.

Like a band of literary iconoclasts, ridding the publishing world of trite stereotypes and protecting challenging literature, super heroes to rival even Marvel,s finest, we will hopefully have novels that are a rollicking good read, bring in the greenbacks and challenge hackneyed literary characters in the process. Now wouldn’t that be a marvel ?

All The Days and Nights Published by The Friday Project and Bad Character published Jonathon Cape Random House are both out now.

Asian Fiction and Beyond Meetup Group (London Based)

More or Less Asians? A debate on Stereotypes in Literature. An Asia House Event: The Review

I AM CHINA written by Xiaolu Guo is a cautionary story of exiled Chinese musician and former Chinese Punk Jian and his girlfriend Mu. The title comes from Vassily Grossman’s magnum opus, Life and Fate, the epic novel of human survival under totalitarianism and the closing line of his own manifesto .

Iona Kirkpatrick is a 31 year old translator tasked with making sense of the letters given to her by her publishing company. Slowly but surely she perseveringly pieces together a love story across the ages. Layer by layer,she gives us a backdrop to the love affair, which is a politically harsh, angular regime which never-endingly excoriates its citizens.

This a book which takes you on an odyssey, a love story across continents that spans the generations and is written in the first person of the character Iona. Guo presents something of a detective story and invites our curiosity, cleverly hooking the reader in from the beginning to end. The translator seemingly unlocks secrets from the past and decodes the story hidden between lines of language. As the story unfolds before us, we get glimpses of the character`s past and their seemingly disparate lives. Guo has a gift for being allegorical without feeling as a reader you are being clubbed on the head with meanings or sign-posted for themes. There are clearly over-arching themes of cultural displacement, distance, and how we stead-fastly remain wedded to our beliefs to a fault; that they can shape us perhaps even hijack us and prevent us from changing in an ever-changing world. In a letter to Jian, comparing America to China, Mu talks of how America is the land of living and live clichés and points to the stark comparison with China. She writes; Its like ideology, you are told to believe some stuff and you are not supposed not to give it up ! Maybe that’s the difference with China. We struggle like buffalo all our lives and we still don’t become someone.”

Just as Jian is in exile thousands of miles away from his own country, there are parallels with Iona who is also someone who has become a reticent London resident. Iona herself is from the isle of Iona and it could be argued is culturally displaced. Yet as she was growing up, she wanted to escape the confines of her small island upbringing. Describing Iona`s childhood, Guo writes; her childhood was about waiting, wondering and the promise of what lay beyond the sea.”

It`s a complex love story which at times is laconic, brutal, uncompromising and laced with Guo`s ironic humour, that is at times bitter-sweet but never saccharine. There’s a juxtaposition between Mu`s rhythmic life, full of life’s nuances and Jian`s life of physically being trapped at the detention centre and trapped by his own beliefs. We see Iona who is emotionless, grasping for human contact in meaningless sexual one off encounters.

There is a literary play-off between the adventurist Mu who leaves behind her native Beijing to go to the States to pursue her dream of being a performance poet, persuaded by her manager that she should off-load her name and adopt the hip name of Sabotage Sisters. She becomes part of the touring group Beijing Maniac. There’s almost an ironic wink to the American Dream and a literary homage to the road movie as they tour from state to state. There is a boldness, a courage, and this contrasts to Iona`s life of existing on “a loop” living. Yet Mu feels a strange disconnect with her new life. She writes “Is that me? I feel that I am wearing a disguise – underneath I am a hundred percent Chinese daughter of the countryside.. its as if Im pretending to be someone else.”

Guo however simply falls into the trap of polarising the free and righteous West with the politically harsh China rather then presenting a 21st century view with its grey areas and political nuances. We hear that the publisher has to pull Iona from the translation task as he cannot risk possible ramifications if he goes ahead and publishes the book following a sinister call from the Minister of State Security that he should not publish anything in relation to Kublai Jian who is the son of a high ranking Chinese politician, fearful of any media publicity. Iona`s character felt listless and it felt there wasn’t enough substance to lift her off the page. However in an ending befitting of a novel that is epic in its story telling and fluid in its prose, I AM CHINA will certainly be on your must-read list for this year and beyond.
I AM CHINA published by Chatto and Windus.

Blog
Follow our blog globooks1.wordpress.com and automatically get any posted reviews

I AM CHINA BY XIAOLU GUO Book Review